Members of Mothers’ Union in Winchester Diocese are especially proud that the organisation had its beginnings in our Diocese in 1876. 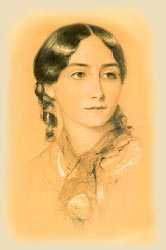 Mary Sumner as a young woman

Mary Sumner was the wife of a clergyman, George Sumner, Rector of the parish of Old Alresford near Winchester. Her own experience of motherhood made her aware of how little preparation and support women received for parenting; so, in 1876 she invited 30 or so local mothers to begin meeting regularly for help and encouragement.

Prayer and practical action were at the heart of this group: its purpose was to enable the mothers to fulfil their responsibility for the material and spiritual well-being of their children. So began the Mothers’ Union. In 1885 Bishop Ernest Wilberforce of Newcastle invited Mary Sumner to speak in Portsmouth. At first she felt reluctant to do so, because at that time it was frowned upon for women to address public meetings. However, she eventually agreed and spoke about the influence of mothers on the development of children. The audience responded enthusiastically.

Soon after this, the Bishop of Winchester decided to make the Mothers’ Union a feature of every parish in the Diocese. Mary had already started using her connections to persuade the wives of bishops, clergy and country squires to set up local branches. With this added impetus branches were formed in Ely, Exeter, Hereford, Litchfield and Newcastle. The first Welsh branch was established by the wife of the Rector of Llandrindod Wells in 1884, and that of Ireland in 1887 at Raheny. In 1889 after a trip to Scotland, a branch was founded at Dunblane. Amongst all this, Mary continued to support the ministry of her husband and he went on to become Suffragan Bishop for Guildford.

As Mothers’ Union expanded, Mary did not have the time to write back to all those members who sought her wise counsel. In response to this difficulty The Mothers’ Union Journal was launched in 1888. This was to achieve a circulation of 100,000 by 1900. Now the journal is known as ‘Families First’. By 1892 Mothers’ Unions were operating in 28 dioceses, and had 60,000 members which had grown to 169,000 at the turn of the century.

Mary Sumner also felt that as it grew, Mothers’ Union was in danger of losing the parochial feeling of friendship and support between members. So, from 1893 annual general meetings were held. Three years later the Central Council was set up with Mary being unanimously elected President. She remained actively involved until she died in 1921.

The Rectory at Old Alresford from which Mary Sumner founded Mothers’ Union has recently been totally refurbished, and is now home to the offices of the Anglican Diocese of Winchester, as well as providing retreat and conference facilities. Known as Old Alresford Place, it also hosts special open days for members of Mothers’ Union.

The Mothers’ Union has now a membership of over 4 million spread across the world in 80 nations. Membership is open to men and women of all ages who are baptised Christians, regardless of marital or parental status.

The head office of Mothers’ Union is Mary Sumner House, adjacent to Westminster Abbey in London, and its varied activities worldwide are co-ordinated from here. Affectionately known as MSH, Mary Sumner House also provides conference facilities for its members and officers.